Let’s talk about miniature photography a bit. Most of us feel the need to make pictures from our (at least according to our opinion) nice painted miniatures for various reasons: to show the community or friends, to create nice scenes, or to have pictures in our pocket of our beloved ones. In any case, it is better to have good photos as bad ones… And there is not that much effort needed to make a giant jump in the quality of this pictures, just a little care, and some tools (price range from really cheap up to where no man has gone before…). 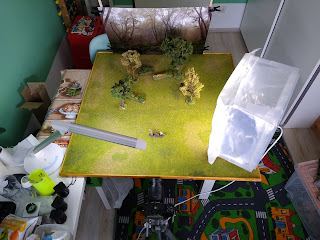 Email ThisBlogThis!Share to TwitterShare to FacebookShare to Pinterest
Labels: photography

37. Frostgrave sets in Oathmark (with bonus rules for Gnolls and Snake-men)

As my sons got 2 boxes of Frostgrave for Christmas (Gnolls and Snake-men), it was urgent to build them. But building without planning gets not 100% usage of the possibilities... Making a Frostgrave warband from 20 miniatures is not a big deal, but what else is possible? Using them in Oathmark is a pretty obvious offer. But how? First step of this planning is to set the limitations: 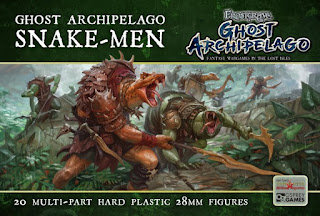 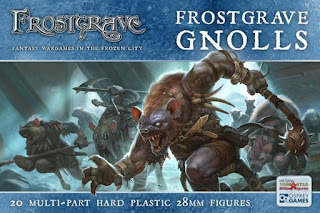 I stated a lot of times how much I Oathmark like (just take a look on the title of my blog). Although, after more then dozen various battles (unfortunately we dont have the time to play that much), I think, there are some small parts of the ruleset, which could use a little polishing. So I did it (all of the following is a correction according to my mindset and experience). These are only small changes of the existing rules, there are no new rules, and there shouldn’t be a significant impact on the game balance. The only exception are the army building limitations, but this is only an option for some battles, and if used, it should serve a better balance, not a worse one.

Now that I have self-sculpted miniatures in acceptable quality, I also want to play with them! In Frostgrave, the golem can be used as a construct, and the treeman as a giant, so I can check off one of my main systems. And in the other one, Oathmark, they certainly can be used as subtitutes for some monsters from the official rulebook, like an Eachy and a Giant for example. But that would bleach out their individual character a bit… So home-brew rules are needed! 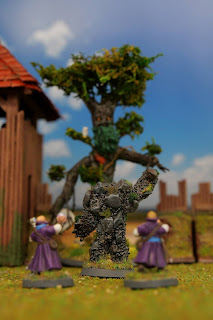 Without a long an meaningless introduction, I just start here: A little after I started painting miniatures, I felt the need to try out sculpting. But as it looks way harder than painting (at least if the result should be more or less acceptable), I had to find something, that’s easy to do. Human figures are obviously not that, because the body proportions has to be correct, the face has to look good, and there are a lot of small details… So actually it’s maybe the worst thing to start with. But I you find the worst case, you just have to invert it, to find the best! So what’s the inverse here? It has to be big, faceless, and with arbitrary proportions. Basically a formless blub… Okay, it would be easy for sure, but I wanted maybe a bit more refined thing… Something humanoid, with hands and legs, but without undefined proportions (and face). Actually an earth elemental (or rock golem) is quite a good start, because its simply some kind of humanoid form, with rocky surface! Like this one (from DevianArt): 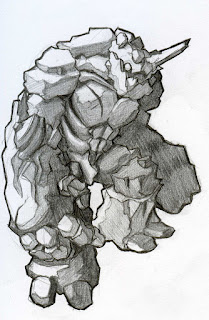 Im not planning to make a news channel out of this blog, but now, I have to make an exception. Because there are great news for every Oathmark fan! Joe McCullough announced on his blog, that halflings arrived to the Marches!

Oathmark setting is in technological terms like european early medieval: there are no crossbows (which I wont accept, because dwarves have to have crossbows, so I made house rules for them), not to mention black power weapons. But what if… What if once somebody would invent a magical powder, which explodes if ignited? And what if somebody puts that powder in a tube, and throws a rock on before igniting it? What if the kingdoms of the Marches would get primitive black powder weapons? Maybe it doesn’t fit the initial idea of Oathmark, but as its just a house rule and not a must, I don’t see big problems here (if You want to use house rules, just agree it with your opponent, if not, You can use your miniatures as archers and catapults after all). 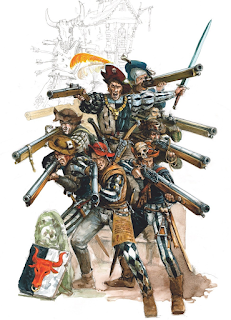 The tower: I made it 1 floor high, and a floor is for 28mm miniatures approximately 50mm. So, for the walls, 100 and 110mm long sticks are needed (50-60mm as for the walls plus 50mm for the floor). But there has to be doors and windows! Placing the doors for the best versatility is according to this example (and sketch): 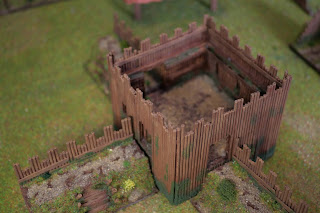 Back in business! After a short break, last weekend I got back, and finally started doing something. I decided, that I will work through my open projects (hopefully all of them...). The first step was not painting (at least for now), but building terrain. A little time ago I started to build a modular wooden fortress. I had two reasons for it. The first one was that I started to write siege rules for Oathmark, and I need to have something to try them out. The other one was, as I saw a youtube video on the TWS channel, which show a very quick way to build wooden fortifications. I basically built the same with some modifications.

First step was planning (as always), I had to decide the main dimensions. My insulation foam (XPS, extruded polystyrene, but it can be made of the cheaper EPS, expanded polystyrene also) is 30mm thick, so the embankment, where the miniatures will stand, will have that height (by the way, in my siege rules, there will be different walls, depending on their height, material, and number of ranks, that has place on them). The battlement is an additional 20mm and (because of the serrated form) 30mm higher. The width and depth was also not a big question. It will be a pretty small wall (the smallest one according to my rules), so it is enough if a single row of Oathmark unit has place on it. The width is at least 5x25mm, so I went with 130mm to have a bit space. 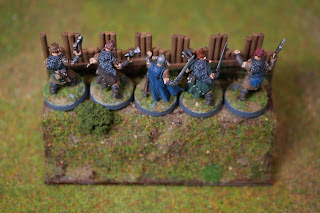 The title is a bit of a clickbait, but honestly, I don’t know a better term for what Im feeling now. Hobby depression? Hobby demotivation? Hobby I-don’t-want-to? It doesn’t really matter, because nominations doesn’t change anything.
Im having a low point. I had so much to do, and I do so little. I get excited about new projects, but don’t finish the old ones. I love some steps in the hobby, but avoid some others. So maybe, hopefully, if I write about it, it helps me to find the best way out of it…
Let’s take a look at the past, in order to find the possible reasons. I started this hobby approximately 1 year ago (I mean practically, because in theory more than 2 decades ago), and what is the summary?
Read more »
at 10:45 5 comments: