As I already wrote in my post about future of Oathmark, there should come chariots for all races in the upcoming Bane of King. These are especially great news for orcs and goblins, as they have no heavy cavalry, and even more for dwarves, as they have no cavalry at all (but humans and elves don’t need them that much, as they are very similar to their heavier cavalry units). As my sons have these armies, my brain immediately started to rev up! 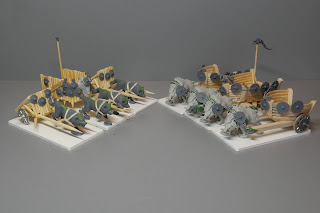 I watched pictures about goblin and dwarf chariots, searched for possible pulling animals and defined the basic conditions (assumed that they will be similar to the undead chariots in Oathbreakers)… Let’s start with these:

As for the design, I wanted for the goblins a primitively fabricated chariot, made from rough materials, and visibly not created to last for eternities. And spikes, a lot of spikes! For them, the choice of animals was easy: wolves from Northstars Goblin Wolf Riders. I wanted a more precise, carefully engineered and with aesthetic sense made chariots. While that process I was hit by the muse (or kissed by the inspiration?): the Oathmark dwarves have that wiking-like look, why not make their chariots like longboats? I loved that idea, but was afraid from the realization… Anyway there was the question of the animals left.

I could imagine bears (although they are not really conventional pulling animals), some kind of bull/bison/buffalo, big enough rams or some huge boars/hogs. After long, really-really long search, because of size and price and availability issues, I ended up by Reaper. Their dire boar looks good, has the right size (there were other options which I dumped because the lack of information about their size), is cheap, its available (what a foul I was…), although it has only one pose. Its not perfect, but still good enough.

Just a quick note, because at the beginning I was not aware of another hard to solve problem: wheels. I wanted to make my own somehow. Mistake. I wasted a lot of time with making shitty looking, amoeba shaped things, which were not even near to be good enough for usage… I turned with my problem to the public, and was quickly helped out on Lead Adventure Forum by some very nice people: Irregularminiatures makes some good looking and cheap spoked cart wheels (and they have some beautiful and pretty cheap cannons too!).

I started to order everything. Apart from some post-brexit delivery times, went everything ok (my son was very happy about the leftover wolf riders). Except the boars… Long story short, I bought all the stock from german online stores (1 piece), and later all the stock from Reapers UK-store (3 pieces). Just needed 4-5-6 weeks to get them…

Anyway at some point of time, I could start to build. I don’t want to describe the whole process, just want to make a short summary.

The chariots are constructed from barbecue sticks (like my wooden fort), used as simply chopped logs. I just spuerglued the proper amount of right length sticks flat, on backing paper (so that the glue doesn’t stick), and assembled it from such panels. The base was the biggest panel, with a long stick(s) in the middle or at the sides (the pulling pole, if that’s the right wording for it). Had to be aware of the size, to be able to fit miniature bases on it. The main chariot got a wall from 3 sides with a light U-shaped front, the smaller ones just a flat, slightly angled wall in the front. The axle was also made from barbecue sticks, and I had to drill the middle of the wheels, to fit on them. I added spikes too. Lot of them. And the axle ends are also spiky. 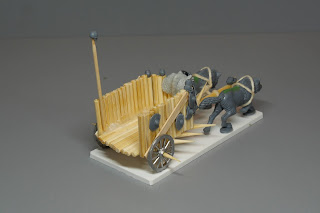 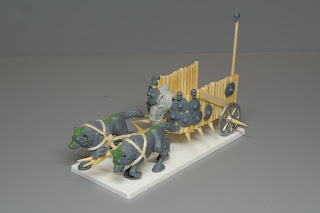 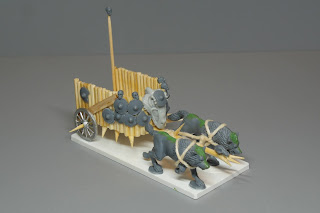 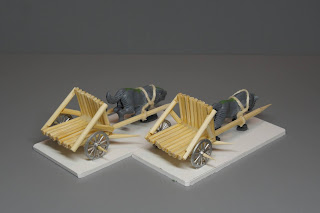 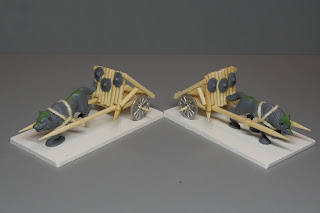 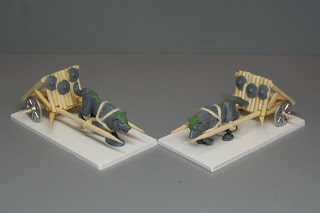 At the end, I reinforced the whole thing with superglue and natron (sprinkle natron on the proper place, drib a bit on glue on it, it sucks the glue up, and creates a hard material) from the underside, because the contact surfaces were too small. The wolves got some harness, made from thicker, soft, cotton strings, which with I played a lot, to find a right looking pattern. As the basics were done, I hade to bind the wolves to the chariots, glue them on a base (just cutouts from hard, PVC foamboard, with glued-in magnets), and add some details: a leftover dinosaur head from Reaper (as a trophy), a flagpole (made from toothpick), a lot of goblin shields (looks good, and makes the boring surfaces interesting) and some various skulls. 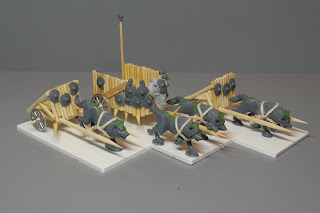 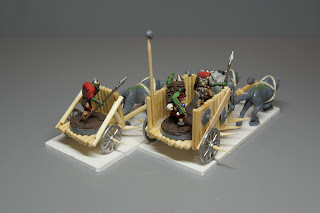 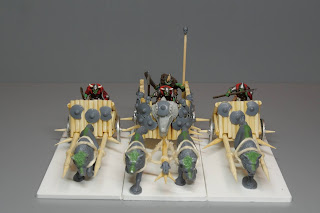 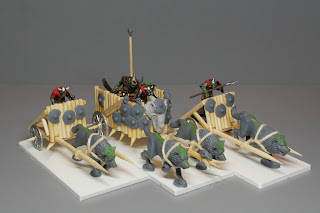 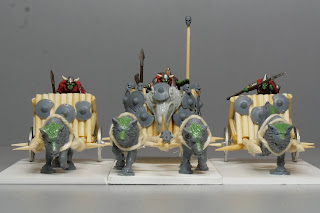 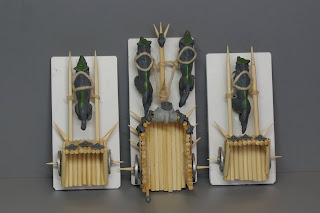 Well, that was a much bigger tinkering challenge… Because wiking boats (and practically almost every other boat) has curved side. To make that, was not just cutting and gluing things. I had to find the proper raw material and then bent it properly. As coffee stir-stick are cheap and thin (as thinner, the easier to bent), I choose them. The bending process is not that complicated, the wood has to be saturated with water (best with hot water or steam), which makes it more flexible, and then dried out in the needed form. The easiest way is to put the stick in water, bring it to boil (few minutes should be enough), take out the sticks (DANGER, its hot!), and put them and array them in a fix form, where an empty jar with the right diameter works best. And what’s the right diameter? It depends on so many things, it’s the best to try…

If the bent stick are dry (and hopefully in the desired form) its time to glue them together with around 1/3 overlap. The best way I found, was to group them for a better form-fit (some might be bigger than others), clamp two together (with enough clamps to close all gaps between), drop superglue between (avoid the clamps). After bonding remove the clamps, and clamp another stick to, and go on until the width (the height of the chariot sides) is reached. At the end there should be a long, arched part made from overlapped stick, which can be cut with a small-teethed saw (the superglue makes the wood to hard to cut with a knife). 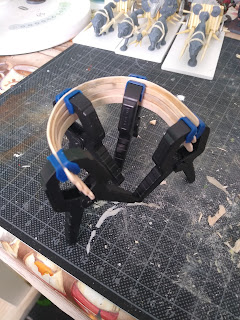 The cutted length depends on the size and form of the chariot (remember, there should fit 1 or 2 miniatuers on 25mm bases in it). I used balsawood rods as the corner and end-points, an cut it to fit between. Then I superglued the planks and the rods together, and on a thin balsawood card, and trimmed around. Now there is the upper side of the chariot, but it needs an underframe. That was easy, just glued balsawood rods together in a shape that seemed to be all right (axle and pulling pole(s)). To glue the wheels on it, was also easy: I just pressed the wheel into the balsawood, it created a deep imprint on it, which was a very good surface for the superglue.

As the main chassis was ready, came the decoration: round shields form various sets, crossbows with quivers, a flagpole (again from a toothpick) with a dragon-flag (from a GBP set), some other ornaments, and a spearhead-shield combo on the wheels. That was fine, but still no animals… 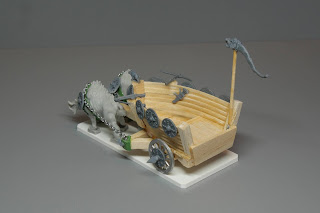 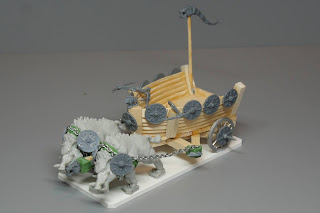 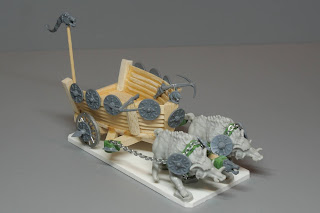 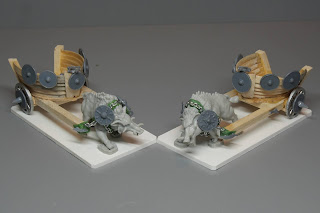 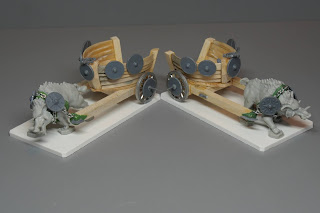 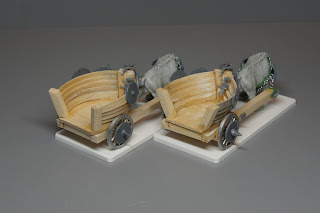 I made a harnish on the boars in a (at least for me) believable form from green-stuff, as it would be a leather strap, and put a small chain on it (pulled into the greenstuff while it was still soft). Now, the chains had to be attached to the chariot, but how? I decided to make some greenstuff coverings on the ends of the puling-poles, pressed some blades (trimmed two handed axes) and ornaments (head of the former mentioned dragon flag) in it, and glued the chain-ends to it, and the boars became some additional protection. After putting them on the same bases, the scratchbuild was ready. 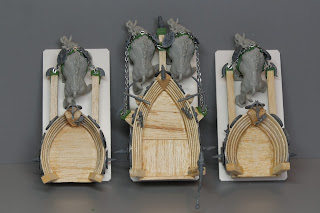 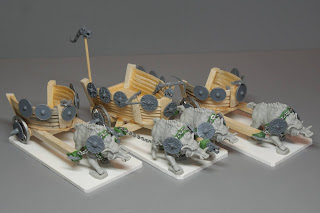 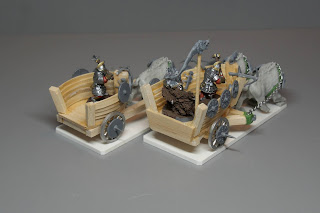 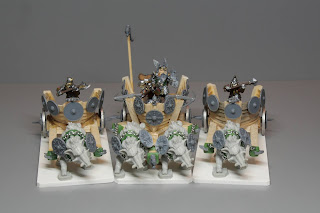 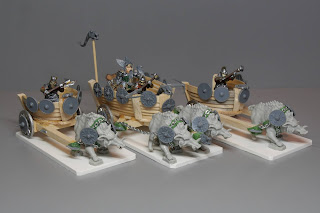 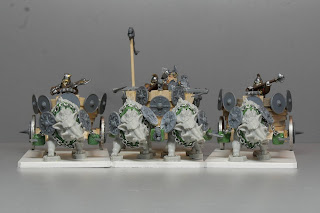