…I promised myself, that I wont start anything new, until I don’t finish my open projects. I kind of kept it (kind of… but that’s another story). But it looks like that I vaccinated my kids with attraction towards tabletop gaming. And Star Wars (do you see the double meaning of the title?). And those two things can only lead to one destination: Star Wars Legion.

Disclaimer: It’s not my project! They decided to get into it, they bought it from their own saved money (okay, I added a bonus Boba Fett and Chewbacca, but I’m allowed to get a bit weak sometimes..). And I will help them to paint it, but wont do it instead of them (unless they completely lose their interest, and I wont be able to watch those miniatures...). 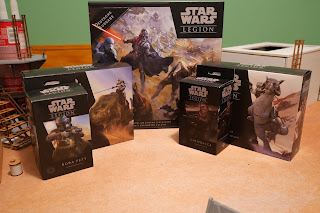 Let’s get a quick overview of the system: It’s a big skirmish game on a 6x4 foot table, the minimum size of 800 point (which is much more than the starter box has…) means around 30 miniatures per side: the mandatory leader and 3 full basic trooper units (6x3) are 19, and let’s say, an additional lieutenant +1, a special unit +6, a support +2, and a heavy unit +1. So it’s not about a half dozen AT-AT´s shuffling towards the enemy lines, there are some smaller vehicles (the biggest is an AT-ST), but mostly troopers (scale is a bit taller than 28mm, but true scale). It uses a lot of cards, tokens and special dice (typical for FFG, see Descent), a 4x6 inch measuring rod, and 3 different sized (and awkward-to-use…) movement templates. It has alternating activation with a twist coming from the command cards, uses morale, covers, terrain. Im not a review writer, but the first games were fun, so I can make some pros and cons already:

Cons (I like to start with the bad news):

It may sound that the game is not bad, but not that good. Well, it isn’t perfect, but as soon as You understand the basic rules, get a bit used to the tokens and that movement template, Your reward will be Star Wars on Your table! And that feeling of getting sucked into the game, is what matters after all! (Warning! Unpainted miniatures and unfinished terrain pieces!) 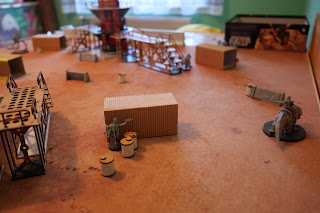 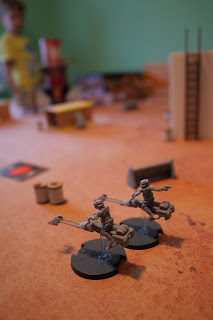 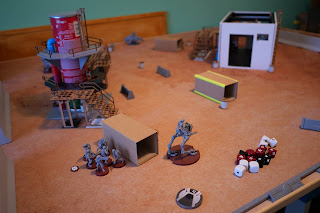