In tabletop world, there is a giant company, unavoidable sprawling in the middle of the whole industry. Some of the gamers hate them, some of them love them, and some, like I, have mixed feelings about them. This is the company, who done a lot, to make the tabletop universe, what it is today. It could be a microscopic genre of nerds without them. They soaked me into this universe of fun, and many others like me. But they are also, who are exploiting the wallets of our kind with their insane price politics, constantly updating rulesets, and breaking games into more and more must buy pieces. And they slain the Old World... Unforgivable.

So I love the GW of my childhood, but I hate the GW of today. And still... There is something, what got me. A game, that compensates a lot of the failures:

Necromunda. (which is a copyright of GW, with all the legal stuff) 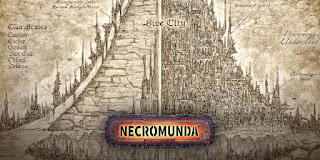 I always loved the aesthetics of this kind of post apocalyptic, industrial, hive megapolis. And as I started to watch youtubers, building terrains for fantasy games, there were always other projects on the right side of the screen. And a lot of them were for Necromunda. And the feeling started to grow in me, I was getting more and more eager for it.

The last push was, when my kids saw the new 40k boxed sets in our local gaming store, and they wanted to buy one from their saved money. I didn't want them to jump in a bottomless pool of expenses and frustration, but I didn't want them to be disappointed either. So I offered them Necromunda. And now, our boxes of Goliaths, Van Saars, Eschers and Orlocks arrived... (and maybe they will fit for the upcoming Stargrave?)

From now on, you can expect Necromunda themed posts here.