I read on Bloodbeards blog an idea: siege setting in Oathmark. I find this great, I would love it (I was always amazed by the painting: Siege of Acre)! So I started to think about possibilities, how this could be implemented in the rules. I don't know if any other fantasy rank-and-flank system has any special rules for siege (are there any?), so the following will be my personal, one man brainstorming about it (I try to write it systematic, but I can’t guarantee the solid lucidity). 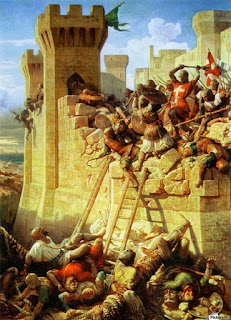 The basic of siege is the unsymmetrical layout of the sides (its relatively hard to imagine a castle against castle combat, only Mortal Engines could do it). So the biggest issue to solve here is the balance. I think, there are two possible ways:

Both of these options need of course careful balancing of the point values. This is less effort with the fixed scenario, but need to be made for every single on of it (because who would be satisfied with only one siege setting?). Although with the recruitable walls would it be more work, but it also would open up the game for self-made sieges. I would clearly prefer the latter, but I’m not a game designer or game tester, nor a financier of such a project.

Another, (but maybe a little) less critical question is the basic process of the siege. This problem contains a lot of detail questions too:

And lets get to the siege weapons!

And because it’s a fantasy setting, don’t forget the magic! I’m afraid, my imagination is insufficient for inventing really fun new siege spells... But this part of game design is one of the biggest strengths of Joseph A. McCullough, so I wouldn’t worry: we would get fantastic magic options!

A lot of details... This could make the game difficult to use. So make them as easy as possible, like the boat rules in Battlesworn (the first Oathmark supplement)? Honestly, I love the simplicity of rules there, but I think it would take the essence out of the siege… So let it be a bit complicated! 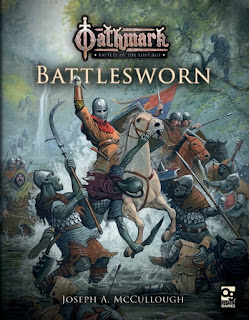 Anyway, I hope that sometimes Joseph A. McCullough and Osprey will fill this gap on the tabletop market, and we will see some kind of siege-rules for Oathmark!